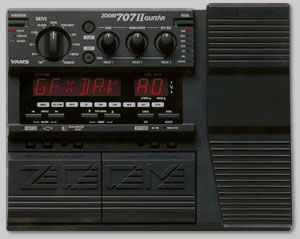 Finding a Zoom 707 II
Please note that the Zoom 707 II is not nearly as common on eBay as the original GFX-707. That's not to say that it is rare, just that people seem to hang on to them.

The Zoom Corporation of Japan (founded in 1983) has a long and illustrious history of providing musicians with high-tech guitar/bass multi-effects units (and more recently recording gear). All at very reasonable prices.

Zoom products feature robust construction and a level of electronic sophistication that has seen even their older products retain substantial resale value. In some cases more than a decade after their initial release.

Broadly speaking, Zoom products are up there with the best of them and are often better value for money.

Aside from cosmetic wear and tear, there is not a lot that will go wrong with these units ... it is either functional or it's not.

Like its predecessor though the Zoom 707 II has issues with its 6mm (1/4") input and output sockets which are mounted directly onto the PCB. Over time and use, the solder joints will weaken and break causing a 'crackling' during use and possible total failure.

Fortunately, resoldering of all the socket connections to the circuit board is a simple fix.

At between AUD $80 and $100, a Zoom 707 II is probably reasonable value, if only for the extra User Patches you can store.

People flogging these on eBay who expect to get over $150 are kidding themselves. You can buy the latest generation Zoom equivalent (new and far superior) for around the same price.


The Zoom 707 II is a very powerful guitar multi-effects unit. While still compact, versatile and sturdy, it is substantially different in more than just appearance from its predecessor the original Zoom GFX-707. I got my 707 II not long after the GFX-707, so I was using them both side-by-side for many years.

With the 707 II, Zoom technicians completely revised the analogue effects section. They also redesigned the controls and improved the operational functionality, while adding support for up to a 128MB Smart Media Card, for storing patch information and/or for storing recorded playing (up to an 8 minute loop!).

Technically the 707 II is a better device in just about every way, when compared to the original GFX-707. But the truth is, I tend to like the original 707 better. Apparently so do a lot of other 707 users, judging by the price that the original 707 still commands relative to the 707 II.

This is not a fault of either the 707 II device or it's maker, just an acknowledgement that the original 707 has a particular or perhaps peculiar combination of attributes that guitarists seem to like. For one thing, the chorus isn't as rich on the 707 II, suggesting some changes to the DSP (Digital Signal Processor) circuitry as well.

Like its predecessor, the Zoom 707 II is nothing less than an effects rack in a box. Again divided into two main effects sections, being Analogue and Digital.

These analogue elements allow you to create your basic guitar sound or 'flavour' for a patch. Again the diversity of possible sounds is impressive. One can recreate most popular guitarists' sounds and/or amazing and totally original sounds in minutes. Importantly, the analogue section has been completely redesigned.

For control over sound ambience, the Reverb options include a simple Tone control to increase/reduce the brightness of reflected sounds, while offering a useful array of (now standard) reverb environments (Room, Hall, Plate, etc.).

All DSP options can be set up individually and may be used in combination (e.g. Chorus + Delay / Reverb).

The pedal can be assigned to perform various effect parameter control functions (e.g. modulation depth, delay length, pitch frequency, etc.), as well as the expected standard Volume and Wah. The Volume Pedal function can also be assigned as Pre or Post delay effects.

The Zoom 707 II also has a built-in Rhythm function (a rather simple drum machine) that provides a selection of useful beats and patterns in various styles for practice or jamming. While these are factory presets with only Tempo and Volume controls, the quality is actually quite respectable and adequate for jamming.


PROS (Listed in order from Best Feature down):

CONS (Listed in order from Worst Feature down):

You can edit any existing patch and save it as a new User Patch. The User Manual includes relatively easy to follow instructions for creating and saving patches. As with all things, it gets easier once you have done it a few times.

Once set up, the Zoom 707 II is relatively simple to use, if you have arranged your patches wisely. The difficulty with almost any multi-effects unit is that you can't apply/remove individual effects 'on the fly' as you can with a Pedal Board that contains discrete effects units. This means that you really need to organise your patches carefully for live performing.

Editor's Note: A notable exception is the Zoom G9.2tt (currently my go-to effects console), which has a 'Live' mode that allows individual effects within a patch to be turned on and off as if they were a bunch of individual pedals - amongst other amazing features.

When the Zoom 707 II first boots up it switches to patch A0 (the first User Patch). From experience, I would strongly recommend that you make this what I call a 'Clean' patch. This means turning off all compression, distortion and DSP effects. Essentially this is the Zoom 707 II equivalent of a 'bypass'. If the Zoom 707 II boots to a high gain patch, it may lead to an unpleasant audience reaction, particularly if your amp is already cranked way up.


There are two recommended approaches to organising your User Patches for best results.

The most important aspect of setting up your User Patches is to come up with a system you can firstly work with, and secondly remember. Getting organised and documenting your patches will greatly improve your ability to get the most from the Zoom 707 II.

Of course, if you really need to store more patches, you could just get a second Zoom 707 II. Given the average price, this is a realistic option.

It is strongly recommended that you take advantage of the extensive User Patch naming capability of the Zoom 707 II. Creating 'User Friendly' patch names can make using the Zoom 707 II a whole lot easier.


IMPORTANT:
Due to some very fundamental differences between the available analogue effects options on the GFX-707 and the Zoom 707 II, it is (very unfortunately) not possible to simply copy settings from the GFX-707 to the Zoom 707 II. The DSP sections of the two devices are however very similar, allowing most digital effects settings to be more readily (manually) copied from the 707 to the 707 II.

The following assessment of the Zoom 707 II takes into account the age of this device and is not an attempt to compare it to Guitar Multi-Effects devices currently on the market.

Your comments and contributions are greatly appreciated!

This article has been online for


181231 - (Excellent) - I own a 707II which was given to me by my cousin and its great. I am searching for any reviews online just to know how others appreciate the effects and yes, this review is a fair review of the zoom 707II.

Editor's Note: Thanks! - A lot of the actual product reviews for this particular guitar tech have been taken down over the years, leaving mostly spurious comments to be found in forum posts. Often these are by people who (in my opinion) have little to no understanding of how the device actually works, or just couldn't be bothered taking the time to find out how to set it up properly. Just something I've noticed over the years. If this 707 II article has been useful, then it has done its job ;-)

Editor's Note: Your contributions are appreciated.