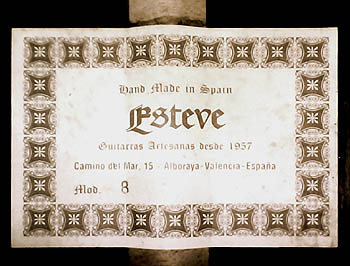 entirely in Spain. According to the makers label and web site this is a 'hand-made guitar'. The Model 8 does have a superb natural classical guitar sound that is rich and deep.

The Esteve Model 8 also has that classic elegant Spanish design right down to the luscious detailing of the Rosette and pointed heel.

Structurally however, the love story ends rather abruptly, when the good looks and sweet voice fail to compensate for some required stiffness. I'm sure there is scope for a 'that's what she said' joke there somewhere ;-)

The guitar under review was brought to me for 'adjustment'. While in love with the sound and acoustic properties of the guitar, the owner had always been dissatisfied with the action and intonation of this instrument.

As a result I spent quite a bit of time getting to know this guitar, and even had a look inside the box (with an endoscope) to see just how well this 'hand-made' guitar was put together.

Note:
The Esteve Model 8 Classical Guitar can be seen listing online for around AUD $2,400 new ($1,700 on sale). Expect to pay anywhere from AUD $1,200 to $1,800 for a used one in good condition. The Model 8 is still generally available as new and also 'On Sale', which will help to keep the used price down.

Also, this instrument does not come standard with a case in Australia - and when you are spending in the vicinity of AUD $2K on a guitar, you will most definitely want a case!

As shipped the action of this instrument was on the high side and the owner also found the intonation to be unsatisfactory. Playing towards the 12th fret was cumbersome.

After some tedious bridge adjustments (explained later) and the eventual restoration of an almost normalised action, the Model 8 now plays very comfortably (for a non-cutaway guitar).

I would suggest however, that it always should have been comfortable to play, being a 'hand-made' instrument.

Due to the neck geometry, the action of the reviewed guitar is still slightly less than optimal approaching the 12th fret.

The neck feel is good and the frets were mostly properly finished.

This is where the Esteve Model 8 Classical Guitar really shines. The sound is really quite delicious and very well suited to recording by microphone. Which of course is the only option, as these instruments are not available ex-factory with built in electronics.

The overall tone is about as well balanced as one is ever likely to get from an acoustic instrument of this type.

The subtleties and nuance of the high notes are complemented by the richness and depth of the low notes.

The external detailing and high gloss finish of the Esteve Model 8 is mostly impressive and exactly what would be expected of an instrument in this price range (see Rosette detail photo at right).

The Esteve Model 8 classical guitar being reviewed is still quite new (just a few years old). It was brought to me because, while the owner loves the look and natural tone/sound of this guitar, he was totally dissatisfied with the guitar's action and intonation as one moves towards the 12th fret.

That kind of complaint is generally not a good indicator for any almost new instrument, and particularly one claiming to be hand-made. To me, that statement of 'hand-made' comes with a very substantial attached responsibility.

The supplied nut (unknown type) was summarily replaced with a natural bone nut.

The original saddle was replaced with a staggered bone one, as generally used for steel string acoustics. This resolved some intonation issues.

It took two attempts (saddles) to get the action right (well almost). When completed this successfully improved both the intonation and action to the point where the owner now firmly believes that I have a gift - while that could very well be a good thing, it doesn't appear to be a gift for making money ;-)

Personally, I'm still not happy with the action of this Model 8 for a number of reasons, beginning with the neck itself. There is no truss rod for fine tuning, so the choice of neck timber(s) and construction method determine how the neck will behave under tension.

Generally speaking there should a very slight upward curve in the neck towards the nut end. Depending on the instrument this can be as little as 1mm to 2mm. This curvature exists to slightly compensate for the maximum swing amplitude of the strings at their mid-point (generally at the 12th fret). The neck on the Model 8, is essentially too flat/straight and that restricts action adjustments. If the action is lowered too much there will be fret buzz almost everywhere.

To further complicate the issue - it can take 2 days (roughly) for the neck to settle into its new state of equilibrium after even slight changes have been made to the saddle height and action. That's why the first saddle attempt became a throw-away ;-)

This also means that - any slight change in string tension, whether that be string gauge or tuning - may also effect the instrument's action. I'm sorry, but in my world, that is just not acceptable for an instrument in this price range.

Other little flaws include:

This is indeed a tough one. On the one hand, there is a beautiful looking instrument that has the classical guitar sound to die for.

On the other hand, there is a build quality that does not deserve the title of 'hand-made' guitar, nor the accompanying price-tag.

Even at half the price, I would be looking elsewhere. I'm hoping that this particular guitar was one that fell through the cracks in the 'Quality Control' section at Esteve, and is not representative of their general build quality for this model. It does leave me thinking though, that I would never buy one of these unless I had played it first and carefully checked all the details for myself. Definitely not a 'buy it online' guitar.

Having been spoilt by owning some Godin classical guitars that are very well made and play flawlessly, I'm probably more critical of the Esteve Model 8 than perhaps others might be. But seriously, I can't get past that these guitars are claimed to be 'hand-made'. If true, they should simply be better than the guitar that I worked on and played - otherwise - what's the point?

With yet more research and a growing understanding ... yeah, that actually happens once in a while ... I note that the Model 8 is in the middle of the Esteve guitar range. That makes a few things fall in to place from a build quality perspective. The Model 8 is good, not great and still a long way from perfect. I'm assuming you get 'perfect' from Esteve at nearly three times the price of the Model 8.

Just FYI:   Quite surprisingly, I have not been able to find any meaningful specifications for the Model 8 guitar and/or its components, even from the official Esteve web site. The guitar did arrive in a standard sized classical guitar hard case and was an extremely snug fit, almost too large, that much I can say. While on my guitar rack, the model 8 body did appear ever so slightly larger than the Godin Presentation. If the guitar returns or I visit the owner again, I will get actual measurements (if it hasn't been sold).