When hardware really was hard-wearing and before everything became plastic, there was metal. Devices were chunky, clunky and totally rock solid. Shown below are a TEAC A3440 Reel to Reel Recorder, 2 Stereo Dolby B / C Encode/Decode units with a few other bits (like a Graphic EQ and home-made metronome) in a custom made console. 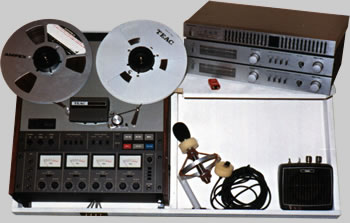 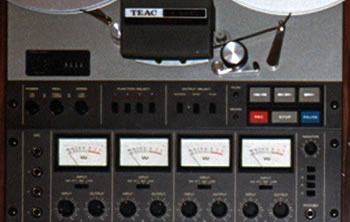 Moving on to the 234 SynCaset was quite a serious performance upgrade. The TASCAM 234 SynCaset was a 19" Rack Mount 4 track cassette recorder with exceptional specs for its day. The inclusion of Dolby B and C NR (Noise Reduction) was an excellent move. Including dbx NR was nothing short of brilliant.

Still working and still an excellent cassette deck, the Technics M235X (though admittedly with replaced heads and CPU) also benefits from the inclusion of Dolby B, C and dbx NR. Other notable features include excellent frequency response for a cassette deck and the ability to take all types of tape. This cassette tape machine was used to record the final stereo mix. 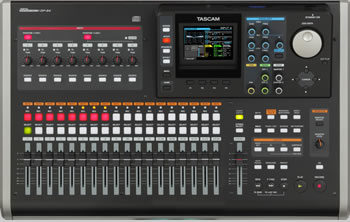 8 Inputs (Line/Mic) with a Hi-Z option for straight guitar input. 24 Channels (12 mono, 6 stereo) plus Stereo Master. DSP effects and Amp Modelling on all channels, plus Mastering Effects. Records to 32GB SD card. Heaven in a box.

This was the time when any type of music recording was made on tape. So even the most sophisticated home recording and professional gear of the day was plagued by tape noise.

The bog standard home recording tool was generally a reel to reel four track machine. The high-end being an eight track reel to reel. In the early days, neither the four or eight track recorders came with any form of noise reduction (not even Dolby B).

My earliest recordings were made on a Teac A3440, with 10" reels of (supposedly) 'low noise' Ampex studio quality tape. This setup evolved to include two stereo Dolby C Encoder/Decoder units which substantially improved the signal to noise ratio. They didn't completely eliminate tape hiss, but did manage to reduce it to (what was at the time) an acceptable level.

One of the biggest shortcomings of the A3440 was actually the Sync Amplifier stages. While the recording preamps were a reasonably good design with respectable noise specs (that's preamplifier noise, not tape noise), the Sync Preamps were horrid by comparison.

The main alternate use though, was what is still today called 'ping ponging' ... where several tracks are mixed down to a single track to free up the original tracks for further recording. In practice though, due to the poor frequency response and high noise level of the original Sync Preamps, the resulting mix was ... well ... not all that good. With each successive generation of dubbing the recorded signal sounded worse and worse. You could realistically only get away with it once.

NOTES: The purpose of the Sync Preamplifiers was to allow you to hear what was already recorded on tape, while recording a new track. Due to the physical gap between the Record and Playback heads, this meant that in this case the Playback signal had to also come from the Recording head (to be synchronised with the stuff you were recording). However the Record Heads have a considerably broader gap (optimised for recording), which resulted in a loss of frequency response when they were used for Playback.

I generally avoided the 'ping pong' process, but other musicians I knew made extensive use of it ... and there came a time when I was asked whether I could fix the problem.

Fortunately the Sync Preamps were a set of 4 identical plug-in modular units. After getting hold of the A3440 circuit schematic and some experimentation, I redesigned the Sync Preamplifier circuit and came up with a design that had a measurable 8dB improvement in preamp noise performance (more than 50% reduction) and a greatly improved frequency response.

Of course this was also around the time when home recording was moving from the clunky Reel to Reel machines to various flavours of Cassette Tape based home recording tools. In fact, I sold my A3440 and replaced it with the Tascam 234 SynCaset.

The SynCaset was a four track cassette based recorder with built-in Dolby C and dbx NR (Noise Reduction), capable of using high-end metal tapes (CrO2 or Chromium Dioxide). The 234 SynCaset was however simply a recorder with no mixing capabilities (unlike the Fostex and Portastudio models).

So I built my own simple battery powered 6 channel mixer. This was used to mix and master to my (respectable, if not brilliant) Technics M235X stereo deck (which also boasted Dolby B, C and dbx NR). There were no wonderful mastering effects (like compression, delay, reverb) but it was still a quantum leap improvement in home recording performance and simplicity of use.

Then there was a hiatus of roughly 25 years during which there were only sporadic and minor recording sessions.

This period included an 8 year stint raising someone else's kids, which introduced me to the world of the digital piano. A high end Casio CDP-3000, 88 key digital piano was acquired for the kids to learn piano on. The aim was to get a device that was as close to a real piano in size and feel as possible. The CDP-3000 did an excellent job in every way.

To this was added my component/toy (since it was all on my credit card anyway), which was a small (and relatively cheap) 36 key, 300 tone, Kawai synthesizer. Via MIDI, the Kawai became an 88 key 16 note polyphonic synth. You've got to love MIDI. Due to space constraints and the complexities of being a work-from-home house-dad, guitar playing became ever less common and was gradually replaced by ever more time spent on the digital piano and synth (which were always readily accessible).

When that relationship eventually went south, I let the kids keep the keyboards. Sadly, I don't think they kept up the playing. In later years their mum offered to sell both of the keyboards to me. Since I'd already paid for them once (plus a lot of credit card interest), I politely declined.

From 2000 to 2005 recording sessions were usually just stereo line-in (electric) or mic'd acoustic guitar dumped straight into a PC. Some tracks were recorded as stereo into the Technics M235X using dbx NR. These were later dumped into the PC as a final stereo mix while adding a 'recorded live' bass or lead guitar line.

That finally brings me to late 2012 and a complete revamp of employed recording technologies. Essentially starting from scratch.

As an added twist, in mid 2011 we moved onto a mountain ridge with no mains power or landline phone. All new gear now had to meet the added criteria of low or preferably even miniscule power consumption. Ideally able to run from a 12 battery.

Among other things, this meant that I had totally skipped a decades worth of 'Hard Disk' recorders. Going instead straight to Solid State recording with high speed SD Cards. After 2 decades of building up PCs and systems, and writing the occasional bit of software, I know more than enough about hard drives, their quirks and failures, to know that skipping the HDD technology was actually a very good thing.

As I've said before, there is no meaningful comparison between the old gear and the equipment currently in use ... it's chalk and cheese.

The current range of hardware DAWs offer DSP (Digital Signal Processing) effects on every channel during either record or mix-down, as well as Mastering effects that include compression and DSP (Reverb, Delay, Chorus etc.). Added to that there is the multi stage Parametric EQ, also available when/wherever it's required.

And of course for guitarists there are now dedicated (if somewhat basic) built-in guitar effects, NR modules and some basic Amp Simulation. These will often not be as flexible as what is available from dedicated guitar effects pedals, but given that they are built into the DAW and ready to use whenever needed ... what an incredible convenience!

Now it's all down to the learning, the composing and the playing. As they say ... 'a work in progress'. Which is of course, exactly what life is.