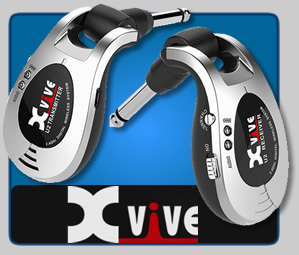 While there is increasing competition in the ranks of affordable wireless systems for guitar, the Xvive U2 Guitar Wireless System certainly does deliver on all of its promises.

The only real criticism being that the 5 hour battery life, is just a little too short. For a few additional dollars though, a small USB PowerBank and charging lead can alleviate this problem and more than double the useful operating time.

While some sellers will provide transmitters and receivers separately, the most economical way to purchase the Xvive U2 will be to buy a Transmitter / Receiver set.

For playing live it could prove very useful to have more than one instrument/guitar set up with its own transmitter. Just preset to a nominated channel and turn on when ready to use. There is no click or pop when the Xvive U2 is switched on or off (which happens on some other units).

I have rarely seen the Xvive U2 Guitar Wireless System being sold as a pre-owned item on eBay. That alone suggests that most users are happy with their purchase - and as a result means that these devices will probably hold their value quite well when offered for sale as 'Pre-owned'.

Compared to similar units, that can sell for a third of the cost (or less), the Xvive U2 is a little pricey. But, the Xvive U2 does perform consistently well.

I love recycling and don't mind buying pre-owned gear, as long as it still works properly.

Be aware though that many eBay sellers ask ridiculous prices for items they are selling. Often this is probably based on their original and 'all too high' purchase price. Unfortunately, using that as a basis for a resale price is simply unrealistic.

For an item in excellent condition (working properly, no cosmetic damage. with original documents and packaging), around two thirds of the best price on eBay for the same new item would be a reasonable amount to ask. The original purchase price is totally irrelevant.

This is a product that I use and highly recommend. There are however similar units available for around one third of the cost. If you are on a tight budget, you might want to look into that.

May 2022 Update - After purchasing some Lekato Stereo wireless units, I can say that the Xvive are indeed better quality.

Xvive however don't currently make stereo units, which is a shame ... and worth noting is that I got 4 Lekato sets for slightly more than the cost of 1 Xvive set.

The Xvive U2 Guitar Wireless System works exceptionally well for such a compact pair of devices. This is a single instrument system with four channels, which allows 3 other units to be used in the same general area. While I wouldn't specifically use it for recording, from my own experience, the performance is good enough that it could be.

Sound quality through the Xvive U2 Guitar Wireless System is excellent. Because the Xvive U2 is using the 2.4 GHz (Wi-Fi) frequency spectrum rather than the old-school FM approach, there is no signal compression required, loss of level or tonality. The signal is of course mono only.

Noise performance is excellent as well. There doesn't appear to be any issues with external noise pickup when used in audio hostile environs with other electronic equipment including Laptops, Tablets, PCs & Wi-Fi. In fact, those who have hum and/or noise issues due to cabling may find the Xvive U2 Guitar Wireless System a workable and affordable solution.

There might be a dB or two of difference in output level when doing an A/B test between the Xvive U2 and a direct cable, but that's it. For all practical purposes, the Xvive U2 is acoustically transparent. As it should be.

The range is also surprisingly good. I think the range quoted in the specifications (up to 30 metres or 100ft line-of-sight), is actually conservative.

I took my guitar with Xvive U2 attached out into the yard to see what the range really was, and to check what kind of sound levels my guitar practicing might be inflicting on my neighbours. Performed without a hitch, even at a good 30m from the building and through a couple walls. Tested at various locations, sometimes without even line-of-sight and still no drop-outs.

I was both impressed by the range and also pleased to discover that my playing wouldn't be considered a public nuisance, even when cranked right up ;-)

There were plenty of strong local Wi-Fi signals around (including my own) and none of these seem to have any impact on performance.

Of course I wasn't able to test how multiple units might interact, but the manufacturers advice recommends "the Xvive U2 wireless system not be placed within 1m of another U2 Wireless system, and more than 3m away from any WI-FI devices such as Internet Routers, Portable Hot Spots etc.," to eliminate any possibility of interference from other devices using the 2.4 GHz frequency. Nothing unexpected.

The inbuilt Lithium battery duration of 5 hours (as quoted) sounds about right and is quite reasonable for such a compact device. The receiver does appear to use more power and is always the first of the two devices to shut down, which does seem counter-intuitive.

And yes ... like most other rechargeable devices, you do need to charge both transmitter and receiver for several hours before first use :-)

From experience, I never seem to catch the flashing red Battery Low LED on the receiver, and it is rather annoying when the system suddenly just stops mid-song.

Definitely not something you'd want happening when playing live. The obvious solution of course is to charge the system before you play / gig and/or have a spare charged transmitter and receiver on hand ready for the start of a new gig or session.

HINT: Alternately connect to either a USB charger or preferably a USB PowerBank (which has no direct connection to an AC source).

When using the PowerBank option, even a single 18650 battery unit will easily double the available hours of operation. Generally more than enough for a day at the office. Also, it may be easier to have a bunch of pre-charged USB Power Banks on hand than remembering to charge your Xvive before every use, particularly if you don't use the Xvives all the time. Note: They will discharge even when not in use.

And speaking of charging ... the Xvive U2 Guitar Wireless System comes with only a split, two output USB lead. There is no actual USB charger/plugpack provided with the purchase.

This means you will need to have or acquire a 5V (Standard USB Out) plugpack/USB adaptor with at least a healthy 1A (1 Amp) charging capacity to charge both the transmitter and receiver simultaneously.

The manual states:
Note: In an emergency, power can be supplied via a USB wall adapter however, the battery life will be reduced.

What they mean is - charging the device while using it, could degrade / shorten battery life. In practice this means that there would come a point where the internal battery would need to be replaced or the device would need to be permanently connected to a Power Bank. Essentially the Chinese manufacturer is covering their corporate butt from possible warranty claims. Since the warranty is only a year ... well ...

If charging from a standard USB port (e.g. laptop USB port at a nominal 400mA each), you may have to charge the transmitter and/or receiver one at a time, thus taking 4+ hours instead of 2 hours of total recharge time.

The charging process does not seem to work if there is insufficient current available with both transmitter and receiver connected, meaning that not all USB chargers/outlets will be up to the task.

I would have liked to see Xvive either double the battery capacity or at least provide for an additional external supply and/or replaceable battery pack for those 'oh shit, I forgot to charge it' moments.

OR - Always come prepared with a couple of charged PowerBanks and charging leads! and of course, some gaffer tape ... just in case you need to tape the PowerBank to your guitar strap (I am, generally speaking, not a fan of placing anything with the capacity to explode in a trouser pocket ;-)

While the specifications state that the Xvive U2 Guitar Wireless System won't work with Mics or Active Pickup guitars, it seems to work with pretty much everything else.

All my acoustic instruments which have Piezo pickups with an Active Tuner/EQ/Preamp work absolutely fine. As of course do straight up magnetic pickups on guitars and bass.

The four channels effectively allow four musicians to be operating the Xvive U2 Guitar Wireless System within a given area at the same time. Restrictions do apply (see specs) to inter-device proximity.

There is essentially no meaningful inherent noise with the Xvive U2 Guitar Wireless System. The Xvive U2 is perfectly well behaved with NO annoying turn on or off, clicks and/or pops. I can confirm that some other units are not so graceful.

In fact, by not having a guitar lead connecting pickups (particularly single coil) to an amp or effects, you may be able to avoid hum (earth loops) and some other forms of signal related noise.

The Xvive U2 Guitar Wireless System might actually be of benefit to those using high gain effects to help get rid of at least some system noise by physically isolating their instrument from their effects and amp.

The Xvive U2 Guitar Wireless System does exactly what the makers claim! Which is rather rare these days.

The only criticisms are that somewhat longer battery life would be useful. But then, having it magically recharge itself would also be cool. The Xvive U2 meets its stated battery spec, if only just. Transmitting a stereo signal would also be handy - but that's just me, I work in stereo ;-)

Also the Channel Selection method of having to repeatedly press/hold a button to sequence through channels is annoying. It is possible to accidentally change the selected channel. You then waste time trying to work out why the devices are not working.

The only untested aspect of performance relates to the use of multiple devices within a confined area. Since I've not encountered any reviews or comments to the contrary, I'll take the makers at their word.

Lastly, there is the price. At around AUD $180, the Xvive U2 Guitar Wireless System sits between the low-end budget transceivers (around AUD $40-) and the multi-channel professional units (AUD $300+). I'm sure the price is higher than it needs to be, given the raft of cheaper 'look-alike' contenders. A fair chunk of the cost is probably in the packaging - a couple of points off for the high price.

What's left to say other than - Love it, comes highly recommended!