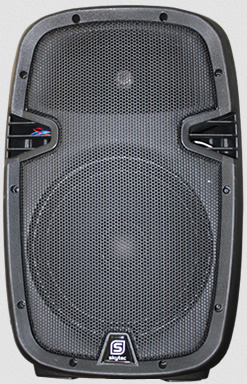 The Vonyx SPJ-1000A (was Skytec SPJ-1000AD) Active Speaker is a symmetrical, compact and low budget unit intended for PA and/or Foldback use.

The two side handles are configured to provide the necessary angle for floor foldback implementation (which as it turns out, is a somewhat questionable design idea).

This bi-amped system comprises of a 10" mid-bass driver and 1" compression horn, squeezed into and ABS plastic shell only just large enough to hold the various components.

Please Note: This article is about the active, powered speaker SPJ-1000A, not the passive SPJ-1000D (8Ω, 300W). The two do not use the same speaker components and cannot be directly compared.

The SPJ-1000A provides a surprisingly even tonality and the output sounds quite clean right up to clipping.

As you would expect with only a 10" mid-bass driver, this kit is somewhat lacking in bottom end. When used in a stereo or PA system, these speakers will benefit greatly from the use of an additional sub woofer (or two) that can can do justice to everything below 200Hz.

In short, probably not enough bass for use as a standalone party speaker (though they are often advertised as such). Depending on your party type and the preferred neighbour annoyance factor, the twelve inch version may be a better party speaker option ;-)

If you are after an inexpensive, lightweight, 100 Watt(ish) active PA speaker or foldback unit for use in relatively tame environments, then the Vonyx SPJ-1000A might be right for you. Particularly in a 'set and forget' permanent installation scenario. Since each unit comes with a line in/out, system expansion is relatively easy.


Claims made for the Vonyx (Skytec) SPJ-1000AD under the heading
of PRODUCT FEATURES include:


Points to note about these claimed 'features':

Like most similar active speakers, the Vonyx SPJ-1000AD is not actually a 400W amplifier with a crossover. It is in fact Bi-amped, meaning there are separate amplifiers for both the 1" horn and 10" bass speaker. These amplifiers just happen to exist on the same power amp chip.

In the SPJ-1000AD the crossing over is done prior to amplification with just a simple 6dB per octave passive filter (a capacitor :-)

Info: Conventional crossover networks come after the amplifier and tend to have substantially steeper filter slopes (up to 18dB per octave) using capacitive and inductive damping.

Secondly the 400W claim (in both the literature and on the carton) is misleading to say the least. It is at best something approaching a 150W RMS amplifier (based on the amplifier chip used) with both horn and woofer fully driven.

And lastly the claim "ABS impact resistant light weight system", is well, bullshit and contradicted by my direct experience. But, more on that later.

So with all the good news out of the way, let's get down to the basics.

With the Tone Controls centred (one assumes that is EQ flat), clipping sets in at a surprisingly low SPL (Sound Pressure Level) for a speaker that boasts 400W on the carton, along with an equally nonsensical quoted SPL max of "up to 119dB".

I can only guess that their SPL max of "up to 119dB", was measured just prior to the voicecoil in the Horn melting.

In the real world, boosting the Bass even slightly will have the pretty (and rather annoyingly bright) blue LED Clipping Indicator (secluded behind the front grille) lit almost continually. That's with even moderate input signal levels. And of course, with only Class D power amplification available, the clipped audio sounds very harsh and nasty indeed.

So once again, the problem here is really in the exaggerated specifications. In this case, being of the sort that belong in a comic book, oh ... sorry, I meant "Graphic Novel".

You know - the kind where the [female] super-hero can lift a bus with one hand (while posing for a selfie with the buss load of kids just saved, of course ;-)

While it's all very neat, tidy and well laid out, all the components appear to be built to that all too common minimalist specification. Sadly that includes the ABS plastic (egg?) shell. 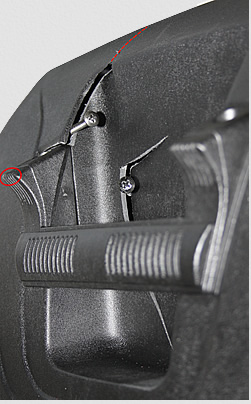 ... because they couldn't survive the brutality that is now Australia's postal service. The handle design (alluded to earlier), which doubles as the prop when used as floor foldback is the key to the problem. Dropping the speaker on either of the two side handles will crack the ABS shell like an egg.

After several units arrived with catastrophic damage, I suggested to the seller that the handles should be removed prior to shipping - success!

Two things to note here. Firstly DJ City were absolutely great in promptly replacing the damaged units, with absolutely no grief to the customer. They did however point out that this had never occurred before while shipping these speakers. Secondly: For subsequent purchases, items were packed more thoroughly in anticipation of the potential travel hazards to Tasmania. As a result there have been no more DOA's.

Better product packaging design would have prevented all this nonsense in the first place.

In the photo (at right) I have marked the impact point on the handle with a red oval. The cracked ABS plastic has been held open with a couple of screws to clearly show the extent of the damage.

The smaller size and lower weight (portability) of the Vonyx (Skytec) SPJ-1000A's were among the primary criteria in my choosing to buy these pretty little ABS plastic speakers. Ease of transportation, car space and low to no back stress were all considered, along with performance and price.

I now think I may have been better served with the more traditional and robust rectangular carpet covered MDF wooden boxes (which, in fairness, Vonyx do have as a slightly more expensive option) :-( Oh well!...

Having not actually encountered the MDF version, I am at this point only assuming they would be more robust. 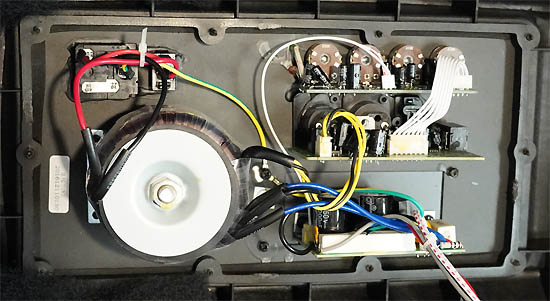 A look inside the Vonyx (Skytec) SPJ-1000AD Active Speaker is quite revealing. While it is very pleasing to see that they have used a toroidal power transformer (generally an indication of a better/higher quality amplifier), I'm reasonably confident that this is primarily to minimise size and weight (lower profile). The speakers and power amp are singularly underwhelming. Also there is virtually no acoustic padding inside the box, probably at least in part due to a lack of space. 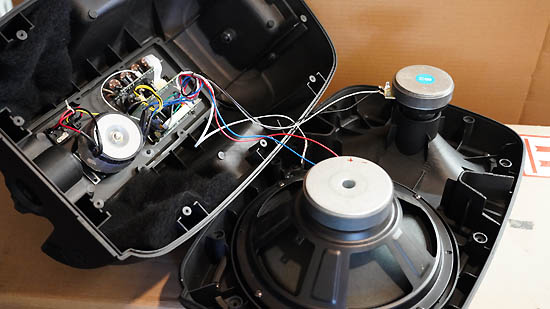 The combination of a 25mm (1") Horn and a 250mm (10") Mid-Bass Speaker produce a reasonably balanced and clean output. When the system is driven to clipping, the distortion is coming from the amplifiers, not the speakers. 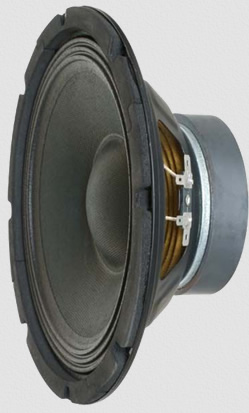 As it happens, you can buy a replacement for the 10" mid-bass speaker (B10-SP1000A), for around AUD $29 (includes shipping). That really tells a story right there. They probably come out of China for under $10 per unit.

The small magnet and voicecoil immediately suggest low efficiency, as witnessed by the less than impressive SPL (Sound Pressure Level) of 93dB.

The small voicecoil also means there will be very little tolerance for overload, because any generated heat has nowhere to go. Once you go past this speaker's 'undisclosed' true limit, it will surely shit itself quite promptly.

At the time of original writing, I simply couldn't find a cheaper new 10" mid-bass speaker on eBay.

Should you see the photos of the B10-SP1000A 10" replacement speaker, you might notice that it has an impressively large 75mm (3") dust cap. This is just to hide the actual and rather ordinary 38mm (1.5") voicecoil. Looks can be very deceiving.

Some of the other claims for this 10" speaker (the actual speaker not the complete box): Peak power: 300W and Power max: 150W are really just numbers that resolve down to a reality that it is probably about 75W RMS.

Note that Peak Power is actually measured at the point of destruction and Power max is quite often referenced to double the rated RMS value - you know, sometimes.

Following this logic through would suggest that each 10" speaker can handle around 75W RMS. With the horn contributing another 25W RMS(ish), thus a system total of around 100W RMS per pretty little box sounds about right.

The remaining specs are nominal and/or as expected for a 10" speaker in this application:
Speaker size: 10", Impedance: 4 Ohm, Frequency response: 55Hz - 4kHz.

The claimed 55Hz bottom end is probably another exaggeration, but of course there are no figures or any frequency response graphs to show how many dB lower the output is at 55Hz. I'm guessing it's a fair bit.

Though the speaker enclosure is ported, the internal volume of this speaker really is minimal and therefore also not conducive to a good bass output level. In short, a pair of Vonyx SPJ-1000AD Active Speakers will work best in conjunction with one or more sub woofers to do the heavy low-end lifting.

Fortunately spare/replacement 10" drivers for these Vonyx/Skytec boxes can readily be purchased. 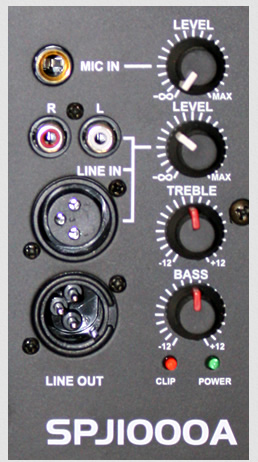 The Vonyx SPJ-1000AD Active Speaker rear panel controls are simple, serviceable and effective. Again, you get what you pay for, being nothing fancy, just the minimum required to do a job.

The Mic Input at the top is provided as a 6mm (1/4") TRS only, with just a Level control. A somewhat nonprofessional approach where a balanced input option would have been better.

The Line Input is provided as two summed RCA (Left and Right to mono) Inputs and a Balanced line Input, again with a Level Control.

There is also a balanced pass through Line Output for chaining additional speakers.

The minimalist Treble and Bass Tone Controls offer 12dB of boost/cut but are probably best left centred or used sparingly for minor adjustments. Any serious EQ'ing should be done before these speakers.

Lastly there are the Clipping Indicator and Power ON LED. The bright Blue Clipping Indicator is hidden behind the front grille. As mentioned earlier, it is advisable to avoid clipping if possible, as the sound of the over-driven Class D amplification is rather harsh.

While the Vonyx SPJ-1000AD Active Speaker is nothing spectacular, it does do what a small and very inexpensive PA system should without a need for tweaking or special consideration. The most serious shortcoming is the ABS plastic case, which will be prone to damage if dropped or mishandled.

The SPJ-1000AD is a compact, relatively light weight and very affordable small venue or rehearsal PA / Foldback option. Probably fine if you don't have a loud drummer in the room. A system using the SPJ-1000AD can of course, easily be expanded and will benefit from the inclusion of a subwoofer or two (personal preference would be to have a sub on each side). Worth remembering is that these things are stupidly cheap at around AUD $150 per box, delivered.

Would also perform fine as a small MC solo/mono PA unit for a use with a single mic. Mic input has a dedicated level control. These boxes are probably not powerful enough for most DJ applications.

Something that might be of interest ...
I later decided to purchase a pair of JBL EON 612 powered speakers. These can output an honest 400W RMS each (but not the 1000W claimed ;-) To reduce the level of an EON 612 to be more or less the same output as a max'd-out SPJ1000A, you almost have to turn the output level on the EON 612 off - I am not kidding! Of course a JBL EON 612 speaker also retails for around five times as much as a Vonyx SPJ1000A.

In short, there is no realistic comparison between the pair of EON 612's (which are a solid Professional Grade powered speaker) and the SPJ1000A's, which can only just cut it as a party box or for rehearsals ;-)