Important! - This Jim Beam promotional guitar is not connected to Gibson in any way, other than the guitar style approximates that of a Gibson ES-335.

The Jim Beam Devil's Cut ES 335 Chinese clone hollow body 6 string electric guitar is not the worst build quality that I have ever seen, but it sure as Hell comes real close. While I'm fond of an occasional whisky, as a musician, you would need to down at least half a bottle before this guitar would start looking (or sounding) any good. Even the application of the Devil's Cut decal artwork (in my estimation, the very best part of the whole guitar), is as rough as three day old moonshine.

If you really think that was a little too scathing, you might not want to read any further. I now look out for these promo guitars to see if this one really was just a one-off shocker. Sadly, that's not the case. I've seen a Les Paul Copy (also in cream) and probably of a similar age, that exhibits many of the same quality control issues that you will find documented below.

That's not to say the Devil's Cut hollow body isn't salvageable as a musical instrument. The one that was brought to me for repair and setup, was turned into a fully 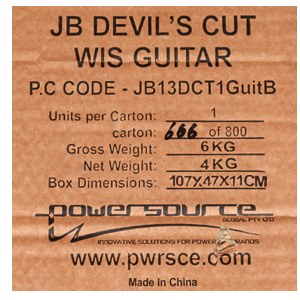 functional and playable electric guitar. It's just that the effort to make that happen probably exceeds the worthiness and monetary value of these particular instruments.

The Jim Beam Devil's Cut hollow body 335 style guitar clones are unbranded guitars with no serial number. Perhaps the manufacturer does not want to cop the blame for this travesty of guitar making. They are absolutely not made by or under licence from Gibson.

The cardboard box label shown at right is all the information that comes with these guitars. Unlike some previous promotional guitars that were badged as Gibson and came provided with full documentation and proof of authenticity.

Powersource Global Pty. Ltd. is an Australian marketing agency that specialises in objectifying product marketing. They have developed a long term relationship with Jim Beam that includes a substantial range and variety of promotional products.

The Devil's Cut guitar promotion appears to have begun, not surprisingly with the introduction of the Devil's Cut whisky in 2011. That sets the earliest manufacture date for these guitars at between 2010 and 2011.

I think it is fair to assume that the carton info [carton 666 of 800] is strictly for show and there are quite likely to be thousands of these cheap and nasty guitars haunting their owners across the world.

There are already many different promotional guitars out there, including ones for rival whisky maker Jack Daniels from Tennessee. Some of the promotional instruments are branded, fully documented and highly collectible. Others like this one are just, well, interesting.

There are at least two Jim Beam Devil's Cut promo guitars, the 335 style and the Les Paul Junior style - there might even be others that I haven't seen. If you have any 'real' information that might be useful and/or interesting here please email me.

I've been told that this guitar may dates back to 2011, however there are still bulletin board posts referencing the Devil's Cut guitars being used in promotions as late as 2016.
Various other Jim Beam electric guitar related
promotions appear to be an on-going concern.

Jim Beam has been involved with these kinds of promotions at least as far back as the early 1990's when they had name-brand manufacturers like Epiphone and Gibson building certified high quality guitars for them (in much smaller quantities).

Please Note: Promotional guitars come up for sale from time to time on ebay. Sometimes these are wrongly advertised as name-brand guitars (e.g. Epiphone or Gibson), which they may not be. Like this little beauty, they may just be a cheap clone. The seller may innocently assume the branding, based on style. However it's still incorrect and illegal in the USA to advertise a guitar where the stated brand cannot be reasonably proven. Gibson in particular are very stern on this point and apparently keen to litigate.

So while some promotional guitars are likely to be clones and probably originate somewhere in China, they are still valid promotional issues. They are just not worth as much as a real Gibson for example. Also if they are cheapies, they will probably be knocked out by the thousands as well, reducing their individual value even further.

The give-away with clones will most notably be the lack of identification, such as a manufacturer's logo and serial number (for Gibsons and Epihones the serial # will be on the back of the headstock). Any branded guitar should also have documentation, so it pays to ask or check before purchasing one.

Worth noting is that even clones may still be worth a couple of hundred dollars (or whatever someone is prepared to pay), they just should not be advertised as a "Insert Brand Here" guitar. And of course, in the world of guitars like anywhere else there is a buck to be made, there are also the true frauds complete with faked logos and serial numbers. Gibson seem to be a popular target for these.

The Devil is in The Detail

When the Devil's Cut guitar being reviewed first arrived it was instantly obvious that the guitar had been messed with by someone who knew just enough to be dangerous and not enough to actually fix it.

Fortunately the new owner, who brought it to me, did have a ready to go 'Plan B' and was perfectly happy to turn it into a wall hanging if it couldn't be redeemed as a playable instrument. In fact his wife had her eye on it for just such a purpose. However, since it is the 'Devil's Cut' guitar, I guess it really is all about redemption ;-)

So - off the shelf (and definitely nowhere near the top shelf) - this guitar was not really playable (by anyone in a sober state).

So let's catalogue the litany of little catastrophes:

This guitar was not at all playable when I received it. Having corrected the neck curvature, filing/sanding down some sharp fret edges, making a new bone nut and then adjusting the action to be nice and low - this guitar is now quite pleasing to play. Once the neck stabilised, the guitar remains nicely in tune between playings.

The passive electronics and pickups are Chinese clones and while they are functional, the output sound is fairly ordinary. I have played the Jim Beam Devil's Cut Hollow Body through my Ceriatone valve amp and there is no hint of any classic 335 sweetness from this guitar. It doesn't sound terrible, it's just relatively ordinary. I can't honestly say whether spending money on better or more appropriate pickups and passive electronics (if you were up for the job) could be justified - unless of course you have plenty of time and desperately need a project.

As mentioned earlier - The build quality and workmanship for this, now