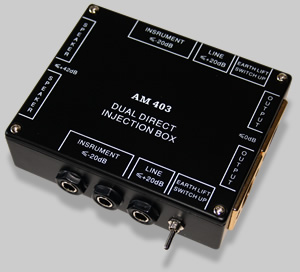 The new price of an AM 403 Dual Direct Inject Box can be around AUD $60 on eBay (includes postage). Realistically speaking, you probably couldn't buy the parts inside it for that money, let alone fabricate a case and pair of circuit boards.

I've never seen a used AM 403 for sale, but if one came along for under AUD$40, it would be worth buying, if only for the two balanced output transformers.

My suspicion though is that anyone who has one of these will be keeping it ;-))

An amplifier Dummy Load is used to replace a loud speaker (or box thereof), when for example, testing an amplifier or in this case, sending the amp's output to a DI Box.

Essentially a Dummy Load is little more than an adequately rated resistance across the amplifier's output (speaker terminals).

While this article is mainly about a Dummy Load to work with a Direct Injection Box (see at right), the main and original purpose for Dummy Loads was for use in testing power amplifiers, so a quick diversion into that arena follows.

A Dummy Load is primarily used for testing the output capability and also stability of audio power amplifiers. For example to measure the maximum RMS output at a given frequency into a specific load, like: Watts RMS @ 1KHz into 8Ω.

For testing purposes, It is generally a good idea for the Dummy Load to be able to handle at least twice (+6dB) the expected maximum RMS output of the amplifier. Three times the max RMS out is probably a better option to allow for high power transients.

Depending on the length of a test run, some kind of cooling may also be required or the resistors may eventually fail from prolonged overheating. I can recall one DIY design from years ago that was water cooled. The thinking was that this approach would dissipate heat more quickly than air cooling. I suppose you could always make a cuppa while you were at it..

There are plenty of options/designs on the net for Dummy Load units including ones with switched loads (4, 8, 16 ohm) and there are all manner of 'how to articles' on YouTube. Just bear in mind that a Dummy Load failure at high outputs could lead to substantial and expensive amplifier damage ... so be very careful.

I mention this because I'm not interested in getting emails telling me that someone made their own Dummy Load after reading this article and then ended up destroying their $2,000 power amp.

So, a couple of simple points.

After all of that, making your own amplifier Dummy Load can be stupidly simple if you have access to a workshop, some tools and the right parts.

While the circuit for an amplifier Dummy Load is about as simple as it gets, selecting the parts should be done with care. The consequences of getting it wrong could be costly. You have been warned (now several times :-) 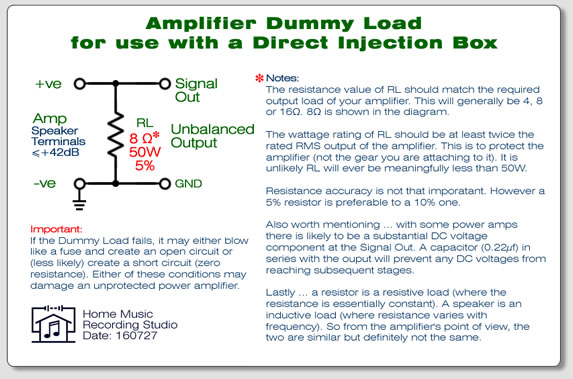 The information in the Pic above is reproduced here with additions.

Resistance:
The resistance value of RL (Resistive Load) should match the required output load of your amplifier. This will generally be 4, 8 or 16Ω (16 ohm). Some amps (particularly valve amps) have selectable output resistance. 8Ω resistance is shown in the diagram. This resistance may be made up using more than one physical resistor.

Resistance accuracy is not that important. However a 5% resistor is preferable to a 10% one.

Power Handling / Wattage:
The wattage rating of RL should be at least twice the rated RMS output of the amplifier. This is to protect the amplifier (not the gear you are attaching to it). It is unlikely that the useful value of RL will ever be meaningfully less than 50W.

Handling Heat:
If the Dummy Load is connected to a high power amp running at high output your resistor(s) may get hot over time and therefore need to be mounted on a heatsink. I put them on a heatsink regardless. It's easier to do it all from the outset rather than have to modify things later (see photo below).

DC Voltages at the Output:
Also worth mentioning ... with some power amps there is likely to be a substantial DC voltage component at the Signal Out. A capacitor (0.22µf) in series with the output will prevent any DC voltages from reaching subsequent stages.

Resistive and Inductive Loads:
A resistor is a resistive load and the resistance is constant regardless of frequency. A speaker is an inductive load, where resistance varies with frequency. So from the amplifier's point of view, the two are similar but definitely not the same. There is plenty of techy info out there on inductive loads if you want the specifics. In short, a Dummy Load is a workable replacement for a speaker if you accept the limitations.

Connections / Cables
Just be aware that the Dummy Load is being used in place of a speaker (or box thereof). 6mm (1/4") mono phono sockets and jacks will work just fine as connectors. Then you will want a speaker cable to connect the amplifier to the Dummy Load and another speaker cable to connect the Dummy Load to the DI Box. Due to the working voltages at amplifier outputs (e.g.: around 25Volts @ 100Watts), you are likely to ruin any guitar leads (generally designed to handle around 1/2V) used in place of proper speaker leads.

Important: (yeah, I know...) If the Dummy Load fails, it may either blow like a fuse, creating an open circuit or (less likely) create a short circuit (zero resistance). Either of these conditions may damage an unprotected power amplifier. Hint, build it not to break! 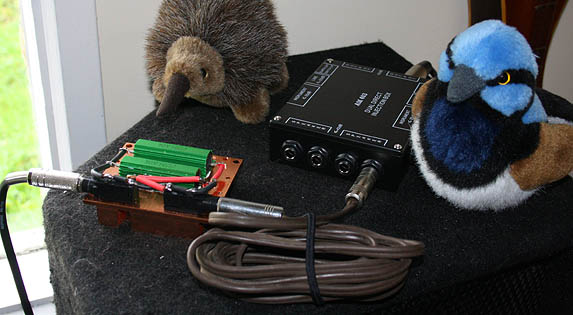 Dummy Load shown above plugged into AM 403 Dual DI Box (with friends). 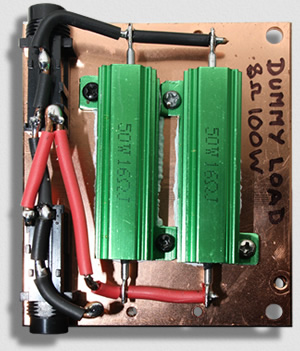 A top view of a single channel home-made Dummy Load (which is close to actual size). The two 50W 16Ω (16 ohm) resistors (readily sourced from eBay) are wired in parallel to give a combined power handling capacity of 100W into 8Ω.

FYI: There are ready to go single 100W 8Ω resistors available, the 16Ω resistors were just what I had on hand at the time I decided to build this unit.

The resistors are mounted onto a copper processor heatsink salvaged from a micro PC. Heat-sink compound has been applied for maximum thermal transmission. Note that the bottom of the resistors had to be filed flat first to remove manufacturing burrs that would have prevented proper contact. The wiring used is solid copper (32A) mostly just to make the finished item both robust and rigid. I'd rather have too much physical support than too little. 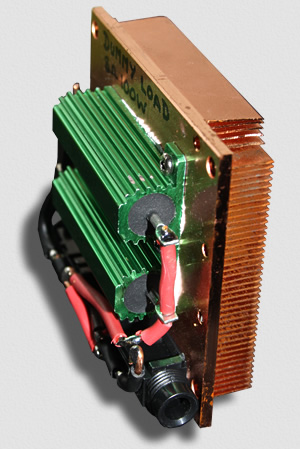 The casing (green) around the resistors is aluminium, and a heatsink of the same would have done just fine. Mounting the resistors into a metal box/case may also work if there is adequate surface area and good thermal contact to quickly dissipate any heat generated.

The copper heatsink shown (which has considerable thermal mass) has only ever become slightly warm to the touch using my 20W Ceriatone valve amp. And that was after hours of running (and on a warm day ;-)

For most practical purposes it's unlikely that this particular heatsink will ever become dangerously hot, but it is something to consider when using higher powered amps and more compact, lower density heatsinks.

Have fun, and take care.